Open for information about 100th Celebration:

The Duchess Mennonite Church was started by Sam Brubaker Ramer of Camp Hill, Cumberland County, PA , a pioneer of the Duchess district. He and Jacob Burkhart made an investigative trip in the summer of 1914 and Sam Ramer bought a quarter section of land east of the village. In the spring of 1915, Sam and his wife Hettie along with his father Jacob Snyder Ramer, an ordained minister, and his niece Esther Shelly moved to Duchess. They were the first Mennonite settlers in the area. 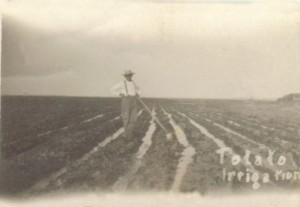 Duchess was named after the wife of the Duke of Sutherland, who owned many acres in the Brooks area. Other villages along the line were named after other members of the family. After extensive surveys, at which time the land was marked off into sections, the C.P.R. decided to create the Eastern Irrigation system  and commenced work on the Bassano Dam in 1909. This was completed in 1914, along with some 3000 miles of ditches, and the first settlers arrived in the spring of that year. The first irrigation water, diverted by the dam, was sent to Gem for use by the new settlers in June 1914. The following year, water was turned into the Duchess district. The first farmer to settle on irrigation land in the area was Sam B. Ramer in 1915, followed by quite a wave of settlement in the next few years, mainly from the States, and many from the Mennonite settlement in Pennsylvania. 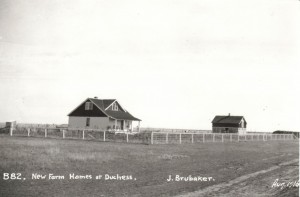 Watch this space for information on our upcoming 100th anniversary in 2017..

Do you have any pictures, stories or events you think should be included in our book?